If you’re searching for a set of sports headphones, then two of the most common models you’re going to come across are the Jaybird X3’s and the Bose Soundsports. For those looking for a set of wireless headphones for when they’re exercising, these are two names that frequently pop up. But which of the two is a better option?

Well, it depends exactly what you’re looking for. They’re both extremely popular and they have good reviews and an allegiance of people who say they’re decent enough headphones. But if we dig a little deeper, is one of these models better than the other?

Well, let’s take a look at the two models to try and see if we can determine which one is the best option if you’re after some wireless headphones.

Let’s take a look at a comparison between the Bose Soundsport Wireless vs the Jaybird X Series. But beforehand, let’s look at whether the Jaybird X4’s are a step up on the Jaybird X3’s.

Sweat. Sweat and rain. The main difference between the X3’s and the X4’s is that the X4’s can cope with rain and sweat a whole lot better than the X3’s, which is important if you exercise outside in all weathers. One of the biggest complaints about the X3’s is that they’re not great at dealing with sweat. So, this upgrade is definitely a necessary one from the X3’s, but this is the only real difference between the two models.

Comparing these two models is actually quite interesting, because for the most part, they’re very similar in terms of performance.

It’s difficult to separate the two, though there are some differences to be aware of. For example, the Bose have a semi open style, whereas the Jaybirds have a closed back style. For me, I prefer semi back as they fit into your ears a lot easier in my opinion. From a style perspective, the Bose are much better too. The Bose are a whole lot better for sound leakage too, which is one of my biggest issues with the Jaybirds.

On the other hand, the Bose Soundsports do lack in some areas. For example, the Jaybirds definitely have a better wireless range in comparison to the Soundsports, which is another pretty important aspect of any set of wireless earbuds. The controls on the Jaybirds are a lot easier to use as well, so between the two there are a few differences between them that you should note.

Better sound – The quality of sound in the Bose headphones edges out the Jaybirds, which also have a relatively decent sound quality if you compare them to other headphones in the field. But, the Soundsports win this war.

NFC connectivity – Most Bose headphones have NFC connectivity, which is a good choice if you’re looking for something as an alternative to Bluetooth.

Better app- The companion app that the Bose headphones use is much better than the Jaybird app, in my opinion.

Expensive – The cost of the Soundsports is a little bit more than the Jaybirds, though they’re not too much more expensive if you compare them.

Better battery life – The Main thing that the Jaybird have over the Bose Soundsport Wireless is the extended battery life. Whilst you’ll get around 6 hours battery life from the Soundsports, you’re going to get between 33-50% extra with the X4’s, which should give you 8-9 hours of battery life. This is pretty significant, so it’s worth taking this into account.

Durable – The upgrade of the X4’s was welcome, and they’re now much better at dealing with water. They’re also a more durable option in comparison to the Bose headphones, which feel a little flimsy in comparison.

Disappointing upgrade- If you compare the X4’s to the X3’s, there isn’t much of an upgrade there. This is a little disappointing, and if they’re put a little more into it, then I think they could have blown the Soundsports out of the water.

Overall, the Bose Soundsports have the edge on sound. So if you’re looking for optimal sound, then they’ll be the better option as you do get a great sound from these buds. But if you want a good sound and a great all-rounder, then the Jaybirds are going to be a better choice. They have a much better battery life in comparison to pretty much every other set of wireless earbuds out there, so they’re definitely worth considering if you need a long lasting set. 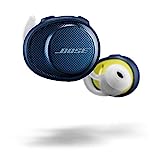