When you’re looking for an RC car, one of the main criteria that you’ll want to consider is the price. For most people, this is going to effect the decision whether they can or can’t get themselves a new RC car.

In general, RC cars aren’t particularly cheap and they can set you back hundreds, of not thousands of dollars in the long run. But for a beginner, an expensive RC car isn’t really necessary to get to grips handling and driving them. In fact, for a beginner it’s often better to go for a cheap RC car, because more expensive cars are also more expensive to fix!

The likelihood is that you’re going to have at least a few bumps and knocks in an RC car, so getting a cheaper one might not be a bad idea. Here are a few of the cheapest RC cars around that can still go at a decent speed. 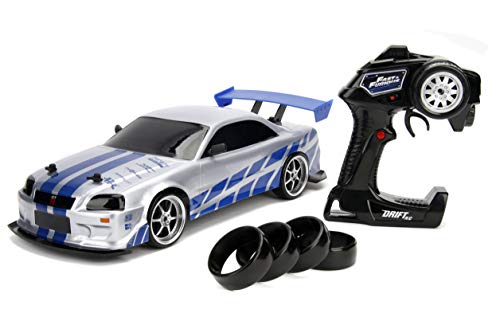 The Skyline has been a lot of kids (and adults!) dream car for decades now, especially after watching Paul Walker drive one in the first of  The Fast and Furious franchise. They’re some of the nicest designs to look at, but this remote control car is fairly practical as well.

I’ll be honest and say that for under $50, you aren’t going to get the best experience from your RC car. The reality is that you need to spend hundreds on a decent RC car to get a high quality experience. But, I don’t think this is the best step for most people. Purchasing a cheap model like this first is likely the best choice for most people. You’ll get a similar experience. The Skyline has a similar grip controller, and whilst it isn’t the fastest RC going, it will be enough for most kids and first timers.

You also get the added benefit that you can charge this RC control with a USB, so you don’t need to worry about tons of batteries being used. It only gets up to around 10mph, but this is a great gift for any first timer. 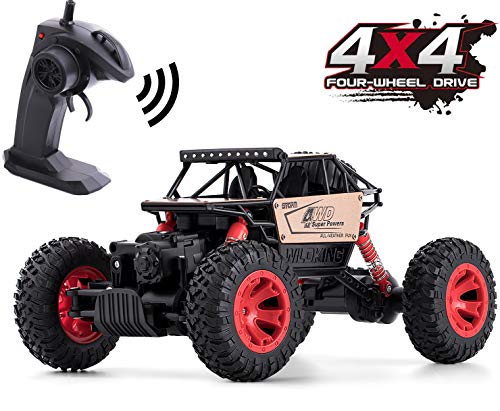 For a rock crawler, it’s actually surprisingly fast and it can get up to speeds of around 15 mph. If you’re looking for something that can handle tougher terrains than the streets – think sand and gravel – then this would prove to be a good choice, as it can handle pretty much anything you throw at it. Because it doesn’t have the typical body of an RC car, you don’t need to worry about bits of plastic breaking either, as there’s barely anything to break aside from the chassis on this one (and that’s pretty sturdy).

This Toyard Rock Crawler provided an alternative for those looking for something that isn’t a typical touring RC car. Whilst it won’t be for everyone, at this price it’s got to be one of the best around for having off road fun. 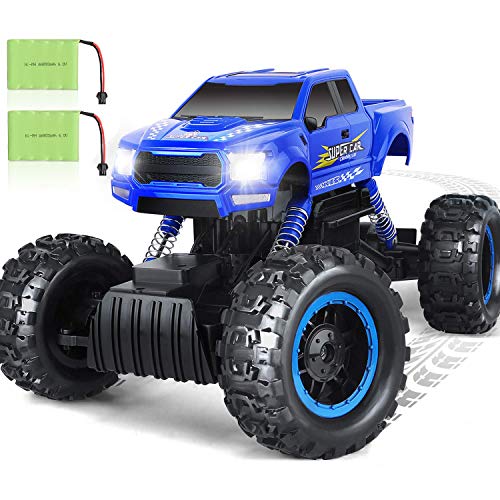 The Double E Monster is one of the best options if you’re just looking to get into off road RC driving. It’s a 1/12 scale monster truck, so it’s still relatively big and bulky. It’s good for all terrains, which means that whilst it works well on rough rocks and gravel, it’s still good on flat surfaces and streets as well. If you want something that realistically looks like a monster truck, then this is a great choice as it’s pretty spot on to the real thing.

There are a few reasons why I’d recommend this model, especially for beginners. Firstly, you don’t need to mess around with batteries, as you can easily charge this within 2 hours and you’ll get roughly 40 minutes of life. The best bit? You can charge it via USB, which is a welcome relief for anyone who is used to toys draining the life out of their AA’s or other sorts of batteries.

Whilst it isn’t the fastest RC car on the block, that’s not really what we’re looking for here. We want something that can go at a decent pace and handle any terrain, which this can. The motor is strong enough for it to power up pretty much anything, which is one of the most important aspects of an off roader. Overall, for beginners this is probably the best option, as it’s available at an entry level price too.

This 1/16th scale monster truck is another good example of a small yet cheap RC car that’s worth considering. It’s as suitable for young kids as it is for adults, and for a small package you’re getting a powerful RC car.

You’ll get about 30 minutes of battery life out of a full charge. This doesn’t measure up to the more expensive RC cars, but if you compare it to the cheaper ones, it’s better than average. Like any good off roader, it’s supported heavily by it’s oversize tyres, which are as durable as they are effective. This is another good quality RC car that will undoubtedly be a good choice for a cheap RC car. 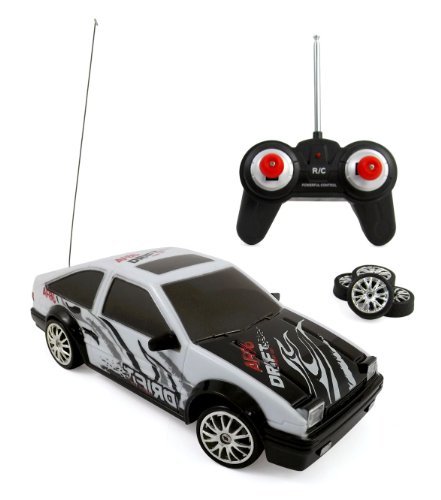 If you want the cheapest RC money can buy, then sticking with Liberty Imports is a pretty decent idea. I’ve bought a ton of different products from them in the past and they’ve all been pretty decent. Of course, they’re not of the highest quality but the point in their products in that they’re cheap and cheerful. And for your small investment, you’re going to get a ton of fun out of the Drift King.

Is it great at drifting? Not really. Is it particularly fast? Not really. But is it a ton of fun? Definitely! Whilst it won’t drift well on most surfaces, it’s particularly efficient on hardwood floors, which is where it works best. You actually get two different sets of tyres with this set as well – one for drifting, and a rubber set which will give you more friction for other surfaces. For this kind of price, you’re not going to get a better option. 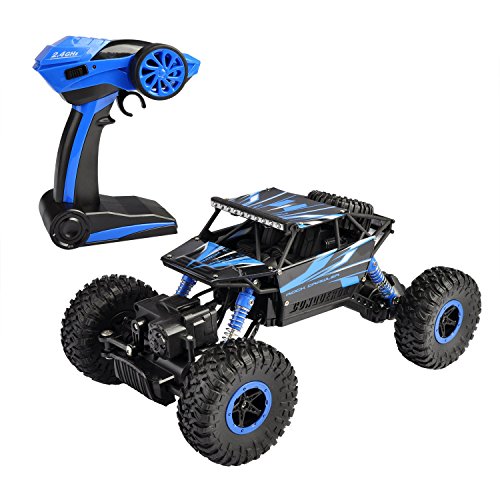 If you want something that you can use as easily on land as you can in water, then you’ll want to get an amphibious RC car. They’re few and far between, and usually to get one they come at a pretty high price. This isn’t the case with this one, which is as cheap as the majority of other RC cars that I’ve listed. But with this model, you get the added bonus of it having the capabilities to work in water.

An a regular RC car, I’ve got to be honest and say that this isn’t the best. It’s slow and you aren’t going to get great steering with it due to the way that it’s designed. So unless you want something that’s specifically amphibious, then you should likely look elsewhere. 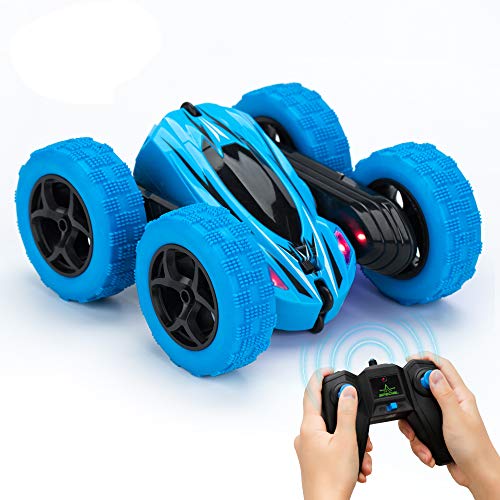 For younger kids, you could opt for a Koowheel RC car. It’s a cheap option if you’re looking for a small RC car that’s still effective.

There are a couple of things about the Koowheel that I particularly like. Firstly, the rubber tyres are big and bulky but also soft, which means that they’ll conform to whatever terrain you’re on. This is especially useful for stoney and rocky environments, as the tyres will easily be able to cope. The second thing about this RC car which makes it pretty good for young kids is that it’s two sided, which you can use it both sides. That means if you flip it, it’s really easy to carry on driving. This is great for younger kids.

This Sharkool RC car is the closest you’ll come to the Jeep style without paying out a lot more for something more of a replica. It’s another off roader, and it can get to speeds of around 15mph.

Though it has a really low battery life of between 20-25 minutes, they’ll actually send you out two batteries with this model. This means that you can charge both up at the same time, and when ones finished you can easily switch them over. This is pretty cool, as it gives you a decent battery life when you consider the price. Another RC car worth looking at if you’re on a tight budget.

Another good option if you are looking for a cheap RC car is this Hapinic 4WD. It’s a good beginners RC car and you can find it available on sale the majority of the time. At 1/18th scale size it’s a particularly small RC car, but this doesn’t mean that you should overlook it.

This is more suitable as a gift for young children more than anything else. It’s slow and steady, but also durable and long lasting. Although it looks as if it may have some pace, it really doesn’t so don’t expect anything too nippy. You also get anti interference with this one, meaning that you can use as many of them simultaneously with each other without having to worry about getting signals crossed. Whilst it’s not the best RC car, it’s cheap and would make a good gift for a young child.

Cheap RC cars are easy to find, and the majority of them are very similar in structure and specifications. They won’t break any records for speed, but they can certainly provide a fun experience for those looking for a remote car that isn’t hundreds of dollars. It’s a good idea to dip your toe in the water before submerging yourself in the hobby that is RC cars. That way, you can get a good idea of whether it’s the right thing for you.

However, making sure you get the right RC car is paramount. A lot of the cheaper models just aren’t going to cut it and won’t give you a good representation of what RC cars can do. So, ensure that you get the right model for you that has a decent quality and is made to a good standard.