If you’re new to using laser pointers, then one of the main things that you’re likely concerned about is the dangers that are associated with them. This is especially true if you’re looking at getting a laser pointer for a loved one – a child or a gift for someone else. If they don’t treat the laser pointer with respect, then there’s the chance that they’re going to cause damage to themselves and others.

If you didn’t know, then the US has limited laser pointers being sold online to under 5 mW. In the UK, they’ve reduced it to just 1 mW. If we consider that previous you could get higher mW laser pointers relatively easily with no concern, then you’ll understand why the dangers of laser pointers have gradually decreased.

There are a few dangers of using a laser pointer that you really need to be fully aware of. If you aren’t careful when using your laser, then you have the ability to jeopardise the safety of yourself and others around you.

The main danger of using a laser pointer is through effecting someone who is operating a vehicle. Flash blindness is the most common effect of getting hit in the eye with a laser pointer. If you hit someone in the eye who is operating some sort of vehicle – be it an airplane, a bus or a car – then you are running the risk of impairing their vision. If you impair the vision of someone operating a vehicle, then you are putting them in danger.

There aren’t an abundance of cases of people using laser pointers to shine them at vehicles, but there are still examples of it. A laser pointer can hit a plane that is miles away, so if a plane is taking off and a laser pointer is shined at the pilot, then this can have a great effect of their vision. Remember that many vehicles use different types of glass that may actually amplify the effect of the laser, too.

This is essentially one of the main reasons why restrictions have been brought in in recent years regarding laser pointers. Unfortunately, people were shining their laser pointer at vehicles and causing them to be impaired.

Other dangers of laser pointers

Flash blindness is not the only danger that you have to be aware of regarding laser pointers. There are other issues that may occur if you’re using a laser pointer. If you’ve been hit with a laser pointer, then it’s probably worth checking out the symptoms that you might be experiencing.

The other main danger of a laser pointer is that it may cause damage to your retina. This is extremely unlikely with the lower mW (milliwatts) of power output that you’ll find with regular laser pointers, but it is still a possibility.

The main way that you would cause damage to your eye like this is directing a pointer at your eye for an extended period of time. If you just hit your eye for a split second with a low power laser pointer, you’re unlikely to cause any real damage.

The real danger occurs if you’re hit for an extended period of time with a high power laser. This can cause a retinal lesion or create a scotoma in your retina. The main symptom of this is that your vision is affected – you’ll likely know that you have a scotoma.

If you feel like you have experienced some sort of retinal damage by being hit in the eye by a laser, then you should consult your doctor immediately. They may help you choose the best action to take to ensure you vision is restored to it’s optimal strength.

Overall, you shouldn’t be too concerned when you’re using a laser pointer – the main damage is cause by a knock on effect (e.g. when you cause someone to crash). Unless you’re specifically buying a higher mW laser pointer – which is illegal to sell but not illegal to own – most laser pointers are relatively low in power. 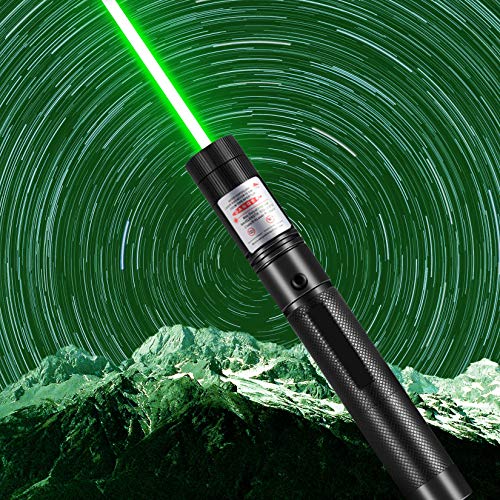