If you’re looking for a good gift for your kids or even for yourself, then a hoverboard is still a safe choice. They provide a great deal of fun, and if you look around, you can find them at a pretty decent price.

And although the hoverboard trend has died off somewhat, they still make an awesome gift for younger kids. However, they’re not only ideal for younger kids, as adults can definitely have fun with them too! You’ll just need to ensure that they can carry your weight, as some hoverboards have a relatively low weight limit, whilst others can carry in excess of 100kg.

Before you purchase one, you’ll want to make sure that you’re getting something that suits your needs, so check the buyer’s guide at the bottom of the article. But for now, let’s take a look at some of the best hoverboards that are currently available if you’re trying to find one less than $300.

For teenagers, I’d recommend this Energen hoverboard over some of the other options out there. There are a few things that set this model apart from the rest, and although they’re not massive differences, they do put this one ahead of the rest.

Firstly, it’s extremely lightweight in comparison to other hoverboards out there. The majority of other hoverboards within this price category are a minimum of 20 lbs, with some of them being much more than that (the Swagtron models are usually 23-25lbs roughly, to give you an example).

This model is 16lbs, which makes it one of the lightest budget hoverboards currently available. Sure, this doesn’t seem like a massive difference, but if you are carrying the hoverboard, you’ll certainly notice it. Whilst you might find more expensive hoverboards as a lightweight option, it isn’t as easy to find lightweight hoverboards light this model.

For kids, it has pretty much everything that you could ask of it. It carries weights up to 200lbs, which is more than enough for the majority of kids and teenagers. It also has Bluetooth installed into the hoverboard itself, which means that you can easily set it up with your phone to play the music that you want. Whilst this might seem a bit like a gimmick for adults, kids love the ability to play music through their own hoverboard.

Gyroor Warrior Hoverboard – Good for Any Terrain (and Fast!) 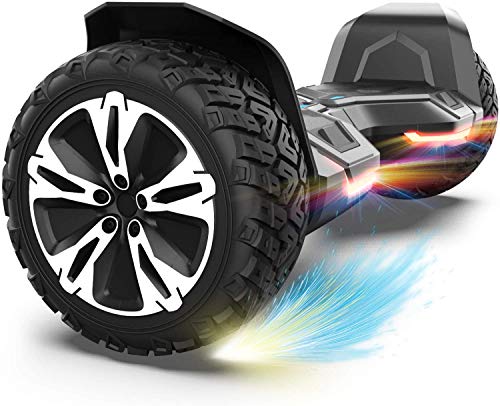 Generally, all-terrain hoverboards aren’t less than $300, and you’ll have to pay more for something that can handle different environments. Most of the time you’re really paying for higher quality tires, which is where the increased price usually comes in. Fortunately, the Gyroor Warrior is still less than $300, which is a bargain for this type of model.

Obviously, the main difference that you’re going to get from this model is that firstly, it can handle the pavement better. Some cheaper hoverboard models will struggle at the first sight of a stone or a rough pavement, whereas this model deals with this well. You can also take this model off of the pavement and onto other terrains like grass, where it works just as well as it does on a completely flat surface. So for this reason alone, this makes it a pretty awesome option.

Although you might think that a bigger and bulkier hoverboard like this would be slower than the rest, the opposite is actually the case. It can reach speeds of 10mph, which is actually quite a bit faster than other budget models out there, which usually only reach 8mph. So, if you’re looking for something fast and able to handle grass, then you might want to opt for the Warrior hoverboard. 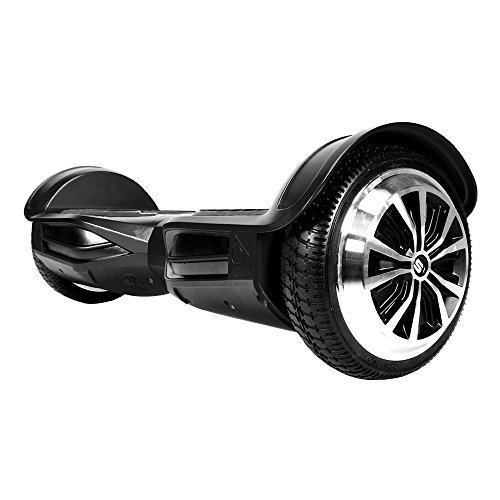 You’re likely to get around 10-11 miles of distance before the battery runs out, and on a single charge, this is pretty impressive. It reaches speeds of 8mph, which is around standard for this type of hoverboard. Like the Energen, this model has Bluetooth built into it, which means that you can use your phone to play any song that you want. Although it’s tires aren’t suitable for any terrain, they have more traction than your standard hoverboard tires too.

Although you can use this model with an integrated app for your phone, it isn’t the best. But from a practical standpoint, this is another good choice for a decent price board. 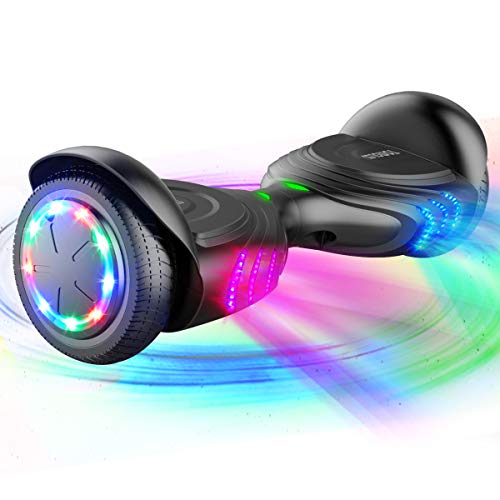 Tomoloo hoverboards have been some of the bestsellers online for a long while now. Typically, they’re pretty well thought of and if you’re looking for a cheap hoverboard, then this is one of the brands that springs to mind. This particular model is good because it has a great battery life, which is essential to any good hoverboard. It can hold up to 220lbs, and uses bluetooth technology to play the speakers along with the flashing lights.

Whilst this Tomoloo hoverboard is great, there are some negatives about it too. One of which is that although the flashing lights are cool, they might get annoying after a while. And guess what? There’s no way to turn these flashing lights off. So, you’re stuck with a hoverboard that looks light it’s signalling a UFO landing the entire time it’s in use, which can get a little annoying.

Another negative about this model is that the app that’s designed to work with it is pretty poor – it’s not well made. So although the hoverboard itself functions well, there are a few negatives about it too. 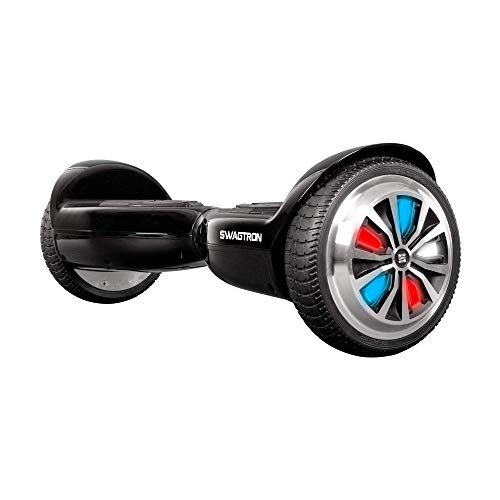 The Swagtron T5 is the cheapest option available, but ironically, it also allows you to carry the most weight. It can hold weights of up to 275lbs, which makes it a good option if you’re looking for something that can be used by adults too.

It can reach speeds of up to 8mph, and although it isn’t completely waterproof, it can handle splashes of water from puddles and light rain. This is important for those that don’t want something cheap that will break within a few months – this is a common problem with really cheap hoverboards, so it’s worth spending $2-300 on at least a half decent model. Although the design of the hoverboard itself is quite bulky, it’s one of the lighter models from Swagtron (although it’s still heavier than the Energen and the Tomoloo).

Swagtron have been quite dominant in the hoverboard market over the years, but recently I’ve noticed more and more negative reviews on their products. I think this is largely due to other, better quality competitors coming into the market and offering similar products at a higher quality, so I can’t say that I’m too surprised. But, this model is still worth considering if you need something that can take higher weights. 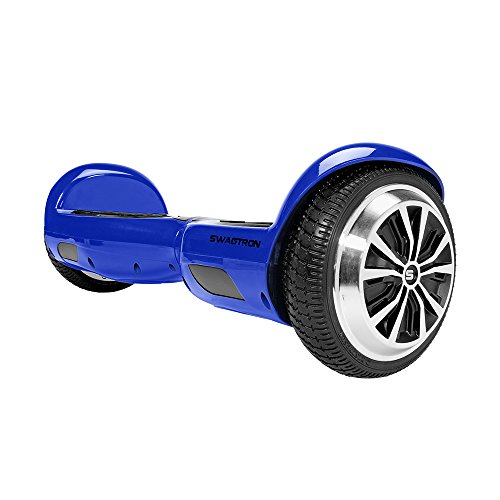 The Swagtron T1 is very similar to the T5, but there are a few differences between them that you’ll want to be aware of.

The main differences are the T1 and the T5 is that essentially, the T1 has an increased battery life. It’s a little bit more expensive, but you’re going to get an extended life out of the T1 if you compare it to the T5. If you’re looking to use your hoverboard for the entire day, then it’s worth looking at the amount of time your hoverboard can last. The T1 lasts for up to 12 miles, which gives you a decent amount of time to use it.

Although one of the drawbacks of the T1 in comparison to the T5 is that it can’t hold the same weight, for most people 220lbs should be enough to carry them comfortable. So if you’re looking for a slightly better version from Swagtron, then this model is definitely a better choice for most people.

One of the main things that you’ll want to think about when purchasing a hoverboard is whether it has bluetooth or speakers installed. Generally, if a hoverboard has these then it tends to be more expensive except in some cases (like you can see with the Energen hoverboard). So, it really depends if you want this feature as part of your hoverboard. Whilst most adults aren’t really going to take advantage of this, for kids having bluetooth compatibility can be a great deal of fun.

Another thing to consider when you’re purchasing a hoverboard is the price. All of the hoverboards listed here are less than $300, but you’re probably wondering whether it’s worth spending more than that. In my opinion, there really isn’t much point in spending more than a few hundred dollars – this is especially true if you’re a beginner or you’re looking for one as a gift. The increase in quality isn’t great, so it’s likely to be best to stick to something within your budget.

The majority of hoverboards will have a weight limit, which can be anywhere between 200 and 300lbs. 200lbs should be adequate for the majority of children and young teenagers, but as they get older you might need a bigger weight than this. Likewise if you’re looking for something for adult males, then you’ll probably want something that can handle this. So, it definitely pays to ensure that you’re getting something that can support your weight.

At the cheaper end of the price range, hoverboards usually range around the 8mph mark. There’s only one hoverboard on this list which is faster than this, and it can only go a few mph faster. We don’t really want hoverboards that can go significantly faster than this, as they can be extremely difficult to control. So, 8mph is going to be more than enough for most kids and adults.

Overall, getting a decent hoverboard is relatively straightforward. As long as you check the reviews online and look at peoples feedback, then you should be good to go. There’s not a massive deal of difference between hoverboards, but in the buyer’s guide I’ve listed all the things that you’ll want to look out for.

A hoverboard can be an awesome gift for a kid, but if they’re too young then you’re going to want to ensure that they’re using the hoverboard safely and responsibly. They can be difficult to learn how to use, so head over to YouTube and check out some hoverboard tutorials beforehand.

All in all, they can be a great gift and if used properly, they’re actually as safe as other toys like skateboards and roller skates. So, they might be a good choice to make it onto the Christmas list.