If you’re looking to create a retro vibe in your bedroom, then nothing can be more retro than your very own lava lamp. Or, maybe you’re looking for an awesome present for the kids. Well, a lava lamp is going to be something that any young child is going to find cool.

There’s a ton of different options online if you’re looking to add a good quality lava lamp to your living room. Of course, you’ll want to do a lot of research online before you make a purchase, because there are a variety of both good and bad products available online. And although generally lava lamps are considered as safe, this is provided that you purchase them from a viable retailer.

You don’t want to purchase a poor quality lava lamp, so ensure that you get one that’s going to last you a while and has easy to follow instructions.

If you’re looking for a high quality lava lamp, then this one undoubtedly blows all of the others out of the water. It’s not just the classic rocket design that made me fall in love with this lava lamp, although it has to be said – it is pretty darn cool.

This lava lamp doesn’t use the same wax that you’re going to find in your average lava lamp. It actually uses black magnetic wax, which in itself is cool. But, the magnetic part of this also gives you the ability to play with the wax whilst it’s moving around inside of the lamp itself.

It comes with 4 different cube shaped magnets that you can use with the lava lamp, or a slightly better large circular magnet. You can use this to draw the wax around the lava lamp itself, which is super cool (not just for kids, but it’s cool for adults too). Just watching the lava move around inside has a therapeutic quality, and the ability to move the lava around is awesome.

Whilst the big blob of black lava isn’t that impressive on it’s own, it gets pretty amazing once you start moving it around and manipulating the lava itself. Even the tiniest magnet will be able to attract all of the ferrofluid within the lamp to it, so you won’t have little black dots scattered around the rest of the lamp.

Overall, to me this is by far one of the most impressive lava lamps that I’ve seen. And, it’s not particularly expensive if you compare it with other novelty lamps of it’s quality. This is undoubtedly the top choice for me, and you wouldn’t be disappointed with this investment. 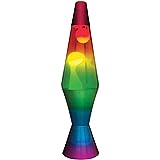 Incase you couldn’t tell, I have a bit of a thing for lava lamps that are a little unique and different. Whilst the rocket lava lamp is unique in a subtle way, this rainbow lava lamp is more of a brash and abrasive look. It’s not particularly subtle, but if you have young kids then they’re absolutely sure to love it.

Aside from the rainbow coloring, this lava lamp does have a more stereotypical lava lamp look. This makes it a great choice if you’re generally looking for a retro look, but it does have a little extra if you go for the handpainted variation. Although it used white wax inside, this can appear different throughout due to the various colors throughout the lamp itself.

This is another awesome choice for anyone looking for something a little funkier than your average lava lamp.

This Urjik lava lamp is a high quality lava lamp masquerading as something much cheaper. In fact, for it’s price, it has the quality of a much more expensive lava lamp. It’s stylish, and whilst it isn’t particularly unique, it’s a definite contender for one of the better looking lava lamps out there.

Much of a lava lamps style isn’t just in the lava inside alone – it also depends on the shape of the lamp itself. This Urjik lamp is a good example of that, as it’s pointed shape is undoubtedly one of the more stylish lamps that you’re going to find out there. Instead of having a flat surface and a short bottom, it’s quite long. So, you will need to have enough space to put this lamp in your lounge.

If you’re looking for a high quality lamp to change the mood in your lounge, then this Urjik Lava Lamp might be the best option available for you. 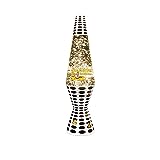 If you’re really looking to get your retro vibe on, then it’s worth looking at this Yellow Submarine lava lamp. It’s not your typical lava lamp, and it adds something a little different to the equation.

It’s actually a very simple silver star lava lamp, although due to the yellow lighting of the lamp itself, sometimes the stars can appear to be gold/yellow. The lava lamps works in the same way as other lava lamps, although the majority of other lava lamps do not have the ability to use this type of star effect. It comes with a high end steel casing, and the glass itself looking to be high quality.

If you’re a Beatles fan, then this is undoubtedly something you’ll want to add to your collection. 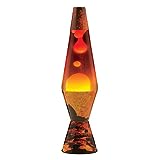 Going back to the more obscure and different lava lamps, this volcano lava lamp is a good example of something that’s a little different.

It’s made by Schylling, who are one of the most popular lava lamp makers around at the moment. Though they aren’t the very best quality, they’re definitely pretty decent, and you shouldn’t have much trouble with them if you do want to return an item. But, the likelihood is that you aren’t going to want to return this lava lamp, as it’s a decent quality.

Volcanos are amongst the things kids are obsessed with, especially young kids. Dinosaurs, lasers and of course, volcanos. If your kids love science, then getting them a volcano lava lamp could be a perfect Christmas present. 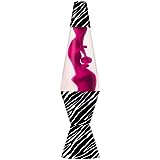 If you want something even funkier than the volcano lava lamp, then this zebra version of the same lava lamp might prove to be a better option.

It has a zebra design on the base and cap, but the inside of the lava lamp is bright pink. These contrasting colors make it particularly impressive, though obviously this type of design won’t suit everyone. The zebra design with the pink wax and clear coloring make it extremely vibrant, and it would be a perfect gift for a child that likes these sorts of colors.

All in all, this is another pretty good example of a standard lava lamp that will undoubtedly look good in your bedroom. Although it’s undoubtedly an acquired taste that won’t suit everyone. 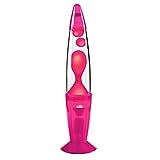 Deciding on a lava lamp isn’t particularly difficult as the majority of them are within a similar price range. But if you want something particularly cheap, then it’s worth looking at this Westminster Groovy Lamp as an alternative option.

It’s a vibrant Neon color, and it works well as a lamp to have on in a dark bedroom (it will keep the atmosphere in the room just perfect). It has a certain simplicity to it, and it’s available in a variety of different colors. So, you’re likely to be able to find a color that’s going to suit you.

Although it’s not the highest quality and the base is made from relatively cheap plastic, it undoubtedly has it’s place in any child or teens bedroom.

If you’re looking for a high quality lava lamp, then it’s worth considering this lava lamp made by Lava Lite. It isn’t your typical lava lamp, as its a little different and the colors are unique.

Whilst the wax blend in red, the liquid in this lava lamp is blue. This makes for a sort of weird combination that isn’t exactly what you’ll consider the norm. Though the colors are vibrant, they do work well together and you’ll definitely consider this as one of the more obscure lava lamps around. it’s 14.5 inches tall, which isn;t particularly tall for a lava lamp. This makes it perfect if you want something that isn’t going to take up half of your lounge.

Although it’s a tad expensive, this is definitely another viable option that you might want to consider if you’re looking for a decent quality lava lamp. 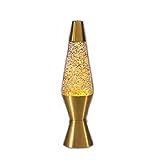 If you have young kids and want to get them a lava lamp they can enjoy, then this chalkboard lava lamp may prove to be a massive hit.

The base and top of the lava lamp are black, and you have the ability to use it like a chalkboard. The lava lamp even includes some chalk so you can get started. Though for safety reasons, it’s obviously best to color or draw whatever you want on the lamp whilst the lamp isn’t running. If you want to remove the chalk, then you can do this extremely easily with a damp cloth.

This is another great example of a lava lamp that does more than just sit there. It provides a good entertainment source for kids, and it’s worth considering if you’re looking for something as a present.

Finally, the last option that I’ve listed in the Creative Motion lava lamp that’s pretty similar to the other lava lamps I’ve talked about.

The main difference with this one is that it’s actually got a black base and cap, which is different from the majority of other lava lamps that are available. Typically lava lamps have a quite brash silver base, which some people think overshadows the rest of the lava lamp. So, it makes sense that a black based lava lamp make prove to be a hit with some people.

Although this might not seem anything special and it does take a long time to warm up, this is still a good choice fi you’re looking for a good quality lava lamp.

What to think about before buying a lava lamp

Purchasing a lava lamp isn’t the biggest decision you’re ever going to have to make in your life. However, there are some things that you’re going to want to take into account to ensure that you’re getting exactly what you want.

Overall it’s difficult to say that there’s one best lava lamp for everyone, because they’re all extremely similar to each other. Saying this, there’s enough options here for you to find a lava lamp that you like. If not, then you can always scour the internet to try and find something more suitable to your needs.

Lava lamps can make the perfect addition to your room. They also make amazing presents, so if you’re looking for something for your kids or even as a housewarming gift, then it’s worth considering getting them a lava lamp.